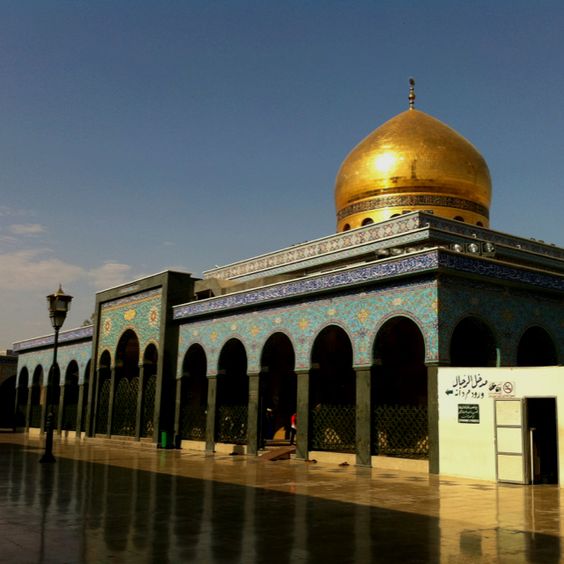 A few weeks ago, I was blessed to visit the holy land of Damascus. Contrary to what the media portrays, the city of Sham wasn’t as I thought it would look like. Here is my three-day experience.

As the flight began to descend, I leaned across the seat and tried to scan the war-torn city of Damascus unfolding in front of my eyes. I’ve been to Syria a few times before but this was different. I was going after 6 years and I could feel butterflies in my stomach. I couldn’t tell if I was really scared of the bombs and bullets but to see the damage done to one of my favorite cities. I wasn’t ready to see the sufferings of the local people. I was suddenly snapped back to reality as the chants of Labaykya Zaynab overwhelmed my heart. At that moment, I was willing to do what it takes to reach her dome. I was reminded that we were going back to her at a time when barely anyone is there and that was enough to regain the determination in me.

The airport thankfully seemed intact. Within an hour, we had boarded our buses. Again, I curiously looked out of the window but it was pitch black and the lights in our bus had been turned off, for security reasons I assumed. Our group mates began reciting eulogies of the sufferings that took place in this very land 1400 years ago. The atmosphere grew solemn, and for the first time in my 6 visits to Shaam, I actually felt the pain. I have heard these marshiyas before but I never cried this much, there was an inexplicable feeling erupting within me. I realized at that time how Bibi Zaynab, Bibi Kulthum, Imam Sajjad, Bibi Sakina and the rest of the caravan suffered through the tortures, the whips, the humiliation and watching the heads of their beloved parading in front of them. This is the land that witnessed the worst of crimes against the family of the Prophet. Perhaps the sad vibes also had to do with the tortures taking place against the innocents today in this very land.

I breathed a sigh of relief when the bus passed through a marketplace. I finally saw some movement. A few Hezbollah soldiers boarded our bus. I was told they will protect us through our 3-day trip. At that time, I low-key felt so honored for being a visitor of Sayyida Zaynab.

When our bus pulled over by our hotel, my eyes began searching frantically for the golden dome. We brisk walked through the cold but we didn’t care. We were too close now. A mixture of emotions waved through me when I finally saw the resting place of our queen. I couldn’t believe I finally made it, for at one point I thought I’d never come back. The grand mosque stood tall with the gold glimmering against the darkness despite the endless attempts to flatten it. I didn’t want to move but the haram had closed and hence, we had to head back to our hotel.

I spent my free time observing the city that has been witnessing 5 years of Cold War against humanity. Yes, it did seem desolate from my previous visits but it wasn’t dead. Stalls were still set up in many streets with people strolling by. The charisma of the Syrian people was still the same, as they’d cheerfully welcome us to their little stores. It was hard to tell they’ve seen hell through these years and that is what defined their spirit of living.

In the evening, our group walked together towards the haram of Bibi Zaynab to commemorate her death anniversary. The main entrance had been sealed off. A huge wall now surrounded the grand mosque which was filled with bullet marks. We passed through the bustling market place and briefly stopped for a moment by a graveyard I’d never seen before just opposite the haram. It was laden with white tombs and a beautiful garden. Photos of soldiers were plastered on the wall. We were explained that the ones buried here are all martyrs who gave their life in defense of the haram of Bibi Zaynab. Hundreds of graves filled the place, I took a moment to observe the photos on the walls. It turned out they were the ones buried underneath. Some of them looked painfully young but each of them bore a look of ferociousness that spoke volumes of their love and devotion for Sayyida Zaynab.

We were welcomed by cheerful security women as we entered the gates of the haram, it felt like we really braved through it all to reach here, even though that wasn’t the case. That’s when it hit me hard, these past years barely witnessed foreigners coming to visit the holy shrine which was once packed with people from all over the world, and that is what I didn’t want to see, an empty mosque.

Tranquility literally washed over me as I finally stepped inside the mosque. The feeling of peace was beautiful. I was glad to see the entire mosque filled with people. We rushed towards the Zarih of Bibi Zaynab and all I could think about was how blessed I was to be there. I didn’t feel like reciting or asking for anything. I just wanted to sit there and absorb the calmness I felt at that moment. This truly was a heaven on earth.

We were also blessed to visit the shrine of Bibi Sakina which was also intact with no hint of the slightest damage. I was sitting under her dome and watching mobs of people walking towards the shrine, clinging to it as I had done a few minutes ago, others were preparing themselves for prayers while some were seated just like me, simply observing and savoring the priceless moment. I cannot recall feeling this relaxed, I truly felt at home.

The next day, we were to tour around the streets to see the damage done by the ISIS. Bullet marks were visible on a lot of shops and buildings but it seemed ok or so we thought.  The second we stopped at a street that was literally isolated and flattened is when the reality hit me. This is what I didn’t want to see. The road that once thrived with people, markets and cars was now surrounded by broken buildings and rubble. The war is real and it robbed thousands of lives. We learnt that this area saw the bloodiest of clashes, with dead bodies lying for three days. I never came to know the fate of those residing within this area but I feared the worst. May the Almighty forever rest their souls in peace.

Unfortunately, our journey to the land of sham didn’t last long, the time to say goodbye came too soon. Again, I was met with a mixture of emotions, I felt upset for leaving this land yet I was excited to go to our final destination which was another piece of heaven on Earth, the land of Karbala.

My three days in the city of Damascus went smooth beyond my expectations. We lived in comfort, ate well and performed our Ziyarah’s at ease. We were protected by the military everywhere we went especially during the night, even if it meant we simply wanted to grab a shawarma or buy a toothbrush a minute away from the hotel. Yes, we could hear gunshots through the trip but that is a routine now for the threat still lives. The poverty caused by the war can be seen but I felt slightly at ease when I saw people being fed for free just outside the haram. I know I haven’t seen the entire city, let alone the country. The struggle is real and the war is still haunting over Syria. But the journey is definitely worthwhile for the personalities that reside in this land faced tortured beyond measure just for us… and I am convinced that we were shielded from even a scratch on our bodies not only by the soldiers, but by these very brave heroines of Islam.